All of us at Firebird want to wish the very best to retiring NHRA Division 6 tech director Dave Schaffel. 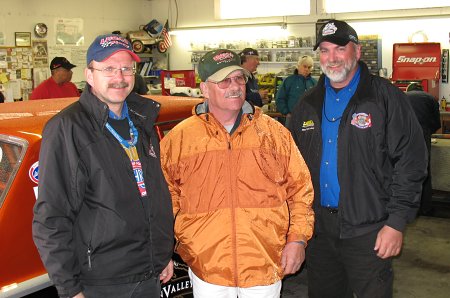 Dave has been a fixture in the Northwest Division for better than 35 years. He not only retains a keen sense of the NHRA Rule Book, but has truthfully been one of the most generous, cordial and kind people anyone would ever cross paths with.

Over the many years, just imagine how many cars he has safety inspected. At Firebird alone, it measures well beyond just several hundred, but more likely several thousand cars of all types and sizes. Even more amazing is the fact he often had to plan out 2-4 days of travel time for a trip south. With his home in Saskatoon, Sask., typically his trips would take somewhere north of 17-18 hours, one-way!

Making his role (and that of his team) a little more challenging was all the years Firebird took great pride in encouraging the Stock, Super Stock and Comp fraternity to try and establish an NHRA national record. At several Ignitor events (often welcoming mine shaft conditions), we even ponied up embroidered Record Blaster jackets, which became quite a sought after incentive. But this added measurably to the role of the tech inspector, especially when a car not only had to establish the record, back it up within 1%, get weighed and then the real work ensued. Nut-by-nut, bolt-by-bolt, an entire motor would get torn down by the tech team to verify that it was accurate and in accordance with the rules for the class.

One year Firebird established three dozen national records and tear down must have lasted for what seemed like a normal work week! But Dave believed strongly in integrity and if it was good for one, then it had to good for all. He was always a team member that followed and enforced the rules, all the while maintaining a smile and casting encouragement towards every competitor.

But one of Schaffel’s best qualities was working with not only the NHRA and track staff, but also the race teams during tech and throughout the course of an event. His people skills were extraordinary. He could empathize with one challenging situation and come up with a sound solution, often making both sides of an argument feel better than they did before the dispute originated.

When it came to training, whether it was hands on at Firebird during a LODRS event, the Summit E.T. Finals or at the NHRA winter meetings in Seattle, he had a real knack at educating everyone from track operators to the weekly tech inspector. And this was all done, while holding down a full-time job, back home in Canada.

Good news, Dave does plan to continue certifying chassis (when the need arises) and staying semi-active in the sport, but from a bit different perspective.

Each of us New brothers and every member of the raceway staff will sincerely miss Dave in the mix of things at our NHRA races. But we’re confident that he’ll continue to attend races when the opportunity presents itself, and we look forward to crossing paths again with him on down the road.

Best wishes to Dave as he retires from his employment with the National Hot Rod Association. We are quite positive he’ll continue living life to the fullest.

Thanks to photographers Blair Alderton, Robert Grice and Gary Himes for sharing each of these images from yesteryear.