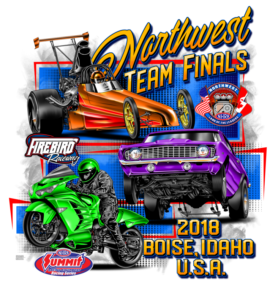 For the seventh-time, Firebird will host the Summit E.T. Finals over Labor Day weekend, August 30-31, Sept. 1-2. Over 400 racers are anticipated from seventeen northwest tracks. Having originated in 1978, this year’s race marks the 41st year of the popular Division 6 event.

Looking to defend their 2017 team title, Pacific Raceways will gunning for their third consecutive track championship. Woodburn Dragstrip holds the distinction of winning more team titles, at 17. Their last victory was in 2015. The home track, Firebird has accumulated 7 championships. Firebird lost a nail biter in 2015 when both Woodburn and Firebird finished in a tie, forcing a tie-breaker decision, which went in favor of Woodburn (pictured in masthead).

Race teams will begin arriving on Wednesday. Thursday will offer a day of testing for all Summit E.T. Finals qualifiers. Friday is loaded with Gambler action for all participants. Saturday features the prestigious Race of Champions. The top racers in the division will be gunning for 4 positions in Super Pro, Pro, Sportsman and Sled/Bike to earn a trip to Pomona, Calif., and a shot at the NHRA Summit national championship (in November). The main event (for the team championship) takes place on Sunday.

Learn more about the event hours, admission price, etc., at: