Digging deep into our archives, we flashback to tell the story of the day Alice Cooper played at Firebird.

The raceway had only been open for just over four years. To put it mildly, these were trying times. New businesses don’t always find success in the early going. In fact, many more fail than succeed.

A deal was struck partway into the season between track general manager Bill New and promoter Bill Sargent (along with fellow flack men Joe Brandish and Marty Wolf) with Great Western Productions. As the story goes, Sargent had booked Alice Cooper one year earlier to play in the old basketball gymnasium at Boise State. It attracted a small and rather disappointing crowd in late-June for his `71 “Love it to Death” tour. 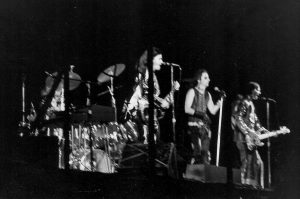 But “School’s Out” was a whole new deal, quickly taking the country by storm. This was the year Alice released their School’s Out tour. Firebird was the site of the eighth stop on the band’s 42-event international swing scheduled for a Tuesday night, the 18th of July.

It was nearly all for naught as the band had lighting and sound equipment damaged or stolen during their performance at Manzanita Speedway in Phoenix, Ariz., on the preceding Sunday.

But thinking quickly, it was decided that the Boise show would go off one day later than previously planned, on Wednesday night. The band played Monday night at the Fairgrounds in Salt Lake, but the next pitfall occurred during their Utah performance when two of their pre-bands Dr. Hook & Medicine Show, along with Captain Beyond cancelled.

To no surprise, the Firebird event was a total sell-out. But with one additional day added to prepare for the Boise stop, the promoter put more tickets on sale at the General Pants store on State Street. The price of admission was $4 bucks.

Guess you could say, you’d be hard pressed to find any rock promoter that would turn down the sale of more tickets, right!?

Making a quick pre-band adjustment Great Western fronted Boise’s Fat Chance with the prospect to take the stage leading up to the main event.

Remarkably enough, it wasn’t one of those traditional hot Summer mid-July nights. It was unseasonably cool, more like a day in April or May, as temps climbed to a high of 50, along with brisk winds. 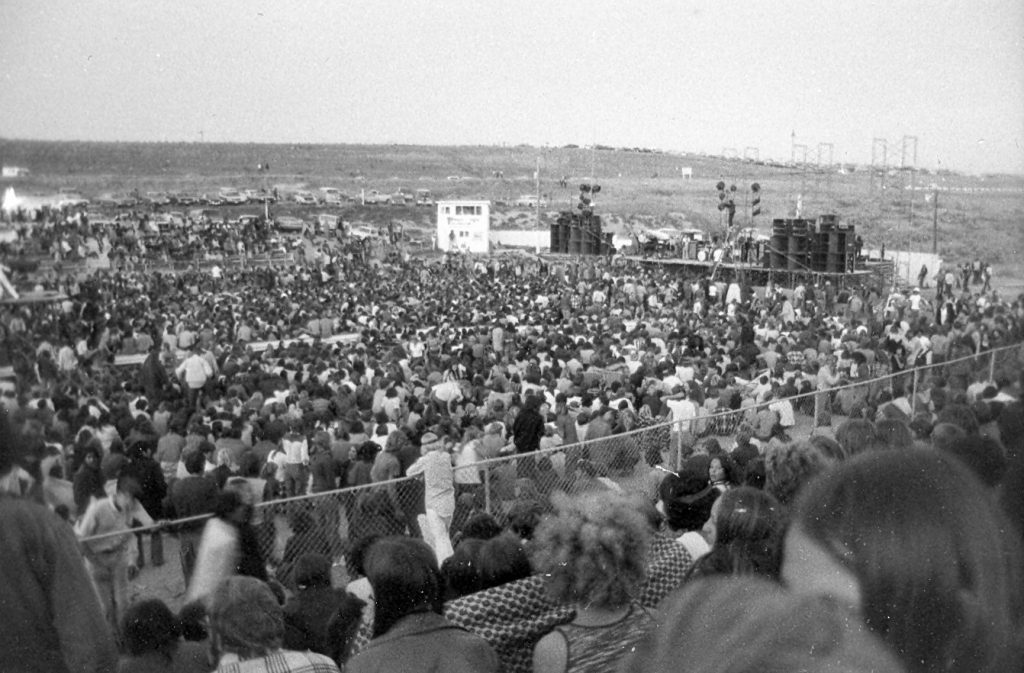 Not to be denied, fans rolled into the raceway in droves.

Not sure anyone knows for sure since it was lined up for miles to the north and south headed in from Highway 16. To put it mildly, the joint was packed to the gunnels.

Yet another twist of fate, the show did not start anywhere close to the announced time. The goal was 7 pm, but Fat Chance took the stage at 9 pm. After an hour, the early band departed and the overflow crowd waited and waited. At 11:15 pm, the four-person headliner stepped onto the giant stage located over the starting line burnout boxes. 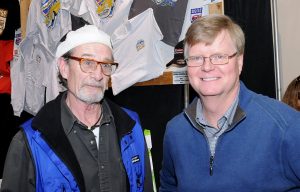 Alice played his hits like the “Jet Song”, “Eighteen” and “School’s Out” as the night came to a close well past midnight. It was quite a night, for all who attended, most who would never forget the experience. It was the biggest single day outdoor concert in the history of the great state of Idaho.

And it certainly wasn’t an evening for the timid, shy or apprehensive. This was rock `n roll during its most outlandish, wacky and bizarre moments. Yes, the boa constrictor appeared on stage, it was a trademark of many early Alice Cooper performances. The last song of the night was sung with a garbage can over his head. And for those who attended it must have taken hours to depart from the race track property.

As the New brothers recall, “It took us over two weeks to pick up all the trash after the event. Granny, Jenkins, Uncle Dusty, Aunt Mary Ellen, the entire New family and other friends were left to take care of the massive aftermath. The broken bottles busted on the race track littered the paved surface almost to the quarter-mile finish line. What a mess it was!!”

Yes, it was a historical moment in the life and times of Firebird. But it had many rough edges. This is one of the reasons that no major concerts ever set foot on the New family property in future years. It just didn’t fit the persona of what the raceway was all about.

For those who may have never heard the story as Bill New likened to often tell it, this is how it was left – long after the band headed out of Idaho to their next stop back in Arizona. Bill put it rather succinctly, “Ellanor said if I ever planned another event like this one at Firebird, she would show me the front door and instruct me not to return.” She meant it, and Bill was a very good listener, especially when it was his wife laying down the law.

That was the story of the day Alice Cooper played Firebird.

In conclusion, there were many, many people who enjoyed the concert. But one in particular, a writer with the Idaho Statesman took issue with the concert. Her name was Patti Minton. She wrote a blistering review stating, “It was four mopheads…who pulled off one of the biggest rip-off(s) since Blood, Sweat & Tears left the Fairgrounds in a huff two summers ago.”

This is the first time it’s been shared from our archives since it last appeared on July 21, 1972.