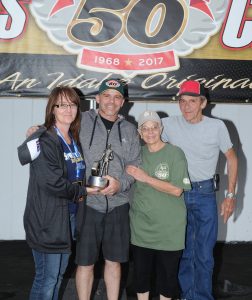 We want to extend heartfelt condolences to the entire Coltrin family with the recent passing of Spike Coltrin on Monday, November 1.

Spike started racing at Firebird not long after the track first opened. In later years he helped his son Mike and many other racers learn the ropes. He was instrumental is assisting quite a number of teams, attending literally hundreds of races at a variety of tracks during the course of nearly five decades.

Not many know this story, but when we first started the construction of the Race Control Tower back in 2010, both Mike and Spike approached the New family wanting us to know that they wanted to contribute to the effort. They generously offered and fulfilled the installation of all the doors throughout the building. And they did it “on the house”. It was truly what the Coltrin family is all about. As they said quite succinctly, we have really enjoyed racing together at Firebird over the years. And now we finally get an opportunity to contribute and give back.

They not only assisted the track, but a number of racers in a variety of ways. And through it all, they never wanted attention nor asked for any extra recognition or favors. Truthfully, it was the way Spike walked his way through life. He was genuine to core, a man who earned the greatest respect from all his peers and friends, and lived life to the fullest.

Every member of the New family, our Firebird staff and the entire racing community are deeply saddened by the loss of Spike. We are all going to miss our friend. Our thoughts and prayers go out to his wife Rita, son Mike and all of the Coltrin family members, close friends and acquaintances.

In 1997, we presented Spike with the 12th Racemaster award. As one of Firebird’s highest honors, we thought it might be a fitting time to share the very story we told that evening.

1997 RACEMASTER AWARD: The final award of the evening is always a special one for those of us in the New family because we get to recognize an individual who personifies what this sport of drag racing is all about. Annually, and now for the twelfth consecutive year, we select a representative who has influenced the racing community in some way, shape or manner.

The title Racemaster originated back in the mid-80’s, and it goes to a person, be it a racer or crewperson, track official or media representative or anyone else for that matter who fits the description that is laser engraved onto this special plaque…..it reads, “An individual who has lent unequaled support towards drag racing in our community.” 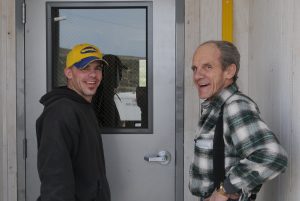 This Firebird Hall of Fame type of award more than fits the individual who has been selected as the `97 honoree.

Having started as a competitor at Firebird roughly a quarter century ago, this individual has developed quite a tenure in the sport of drag racing, although a little time off was taken during the 80’s, before returning to Firebird to help give his son an opportunity to go racing.

If you haven’t yet figured out who we’re talkin’ about, just keep listening.

He attended his first event at Firebird in the year 1971. He and his best buddy Eddie Wilson rolled through the Firebird turnstiles to watch their first race, but when they arrived and as the story goes—Bill New talked both of these guys into racing their gun-powder blue ’57 Chevy. They went out that day and ran an impressive 14.55 on street tires.

This literally inspired the two to return again, ready to give it another try. Well, after taking a couple years off, they returned with a ’57 Nomad sometime in `73 or `74. After getting their tech card and pit passes, they proceeded to tech to find out from B.K. Newell, who was Firebird’s new tech director back in the day that they couldn’t run because they didn’t have seat belts of all things. Word got back around to Bill at the front gates, and his first thought was, “here we’ve got a grand total of 28 racers here today and we’re gonna reject one in tech? Bill said absolutely not—keeping in mind, the ownership was trying everything in their power just to keep the gates open. So a plan was developed. They went to work to resolve the situation and you know what they came up with…a lengthy piece of half inch rope!!!! They tied it around the bottom of the bucket seat with a couple of knots and YES—they raced that day, rope and all.

Of course, the next time they returned they had regular belts and competed originally in a class called Giant eliminator. This was a category at the time, that combined the NHRA Weight-to-Cubic Inch classes of Modified, Super Stock and Stock. It was in that very same year that the sport of drag racing was also headed in an entirely new direction called handicapped, bracket racing.

As the story goes, the person we’re honoring tonight was a hot rodder who originally had a passion for nailing the loud pedal from stop-light-to-stop-light like so many of us in our younger days, before getting involved in organized drag racing. 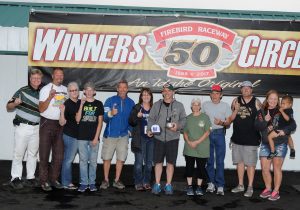 Looking back to the mid-70’s, tonight’s honoree raced with the likes of Dave Goff, Dale Harsin, Ace Nichols, Randy Leighton, Rick Sparks, Frank Wise, Stan Keller and many, many others.

Having spent several years at Eddie’s Vista Tire location in the front-end alignment area, tonight’s honoree actually started out as a milk truck delivery driver for Triangle Dairy. Today an accomplished businessman who operates a successful carpentry company, Spike literally works his tail off, often busting out 12 to 15 hour days,  and occasionally working around the clock when the job demands extra attention.

In more recent years, the Coltrin team has grown to include a multitude of race cars, helping quite of number of participants in a variety of ways and the one thing you can’t take away from this person is the fact, he certainly supports what goes on at Firebird, having attended and raced at just about every race on the Firebird calendar.

Tonight the Racemaster award goes to a person who personifies what this award is all about, Ladies and Gentleman let us introduce the 12th recipient of one of Firebird’s highest honors – Mr. Spike Coltrin