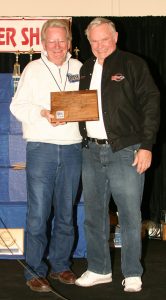 We were saddened to learn of the passing of Galen Blanc, 86, on Thursday, October 7, 2021. In life, all of us meet and come to know people that are quite special. Galen was indeed one of those individuals that truly stood out from the crowd, a genuinely kind, thoughtful and admired person that enjoyed every day for what it offered.

Looking back in time, Blanc was a pioneer within the hot rodding fraternity. From his earliest roots, he always was connected to something motorized. And his true automotive love was the 1936 Ford. Sure, he liked many of the cars originally created by Henry Ford, but the fat-fendered `36 really nailed it in his eye.

He was a perfectionist in so many ways. It didn’t matter if he was restoring an early gas pump or perhaps a vintage Schwinn bicycle, Galen would immerse himself in the smallest of details. If something needed cad plated, that is what he would do. Whether it was building a hot rod engine or detailing a frame, he would do things in such microscopic detail that it would be hard to find any imperfections or flaws when it was completed.

And he wasn’t just into hot rods, he started way back in the day putting together and racing a front-engined “shorty” dragster. This was way back in the day (in the very early 60’s) when racing took place out on Gowen Field road behind today’s Boise Airport. His dragster was meticulous, too, running a hemi-motor, competing and winning with the best in his class.

For many years, Galen’s Auto Body was a fixture near downtown Boise. He would not only work (with his staff) on damaged cars and trucks during regular hours, but he dedicated time to restoring and finishing an assortment of vintage equipment for many friends and acquaintances. Guess you could say, he just plain loved working on most anything with a motor in it.

In 2006, he completely finished one of the most gorgeous 1936 Fords you would ever lay eyes on. It was a full-fendered roadster that was painted black with a black top. The interior was red, along with the wheels and chassis and four old school white wide walls for tires. The hot rod was a sight to behold when it was unveiled at the Boise Roadster Show in 2006 at Expo Idaho.

Show producer Bill New that same year was proud to present his life-long friend the coveted Master-Builder award (pictured at the top right of this page). Galen was most deserving of this honor given his dedication and pledge towards helping the Roadster Show to be the event it is each and every March.

Unquestionably, there are countless other stories about the life of Galen Blanc. Firebird general manager Scott New remembered, “As a senior in high school and when I first got my `40 Ford convertible body, which was a basket case (back in 1979), Galen was the first person to come look it over. He was kind enough to say that it had potential even though the floor boards were completely rusted out and the doors were in a sad state of disrepair and deterioration. Ten years later Galen’s body shop helped to do some of the early cosmetic metal work to the project. He was always helpful and giving when the opportunity presented itself.”

He lived in the same home (along with a shop he worked in) for the better part of his entire life up on the Boise bench. A Celebration of Life will be held for all who might like to attend in Galen’s shop, which is located at 1418 S. Nash St., Boise. The family has asked all those who attend to simply bring stories to share. The gathering will feature all of Galen’s finest work (and treasures) on Friday, October 22nd, from 1 pm – 8 pm.

On behalf of our entire New family, we want to extend condolences to his wife Gayle, and his children Dan, Jeff, Rob and Gayla Blanc, along with all his friends. He lived life to the absolute max. We’re confident that if there is a hot rod hangout up in heaven, Galen will be right at the forefront of searching, tinkering and working on old cars and parts.

Images provided from the Roadster Show photo archives, along with an early day’s scrapbook shared by Rick Hale and select show images by Nitrophoto.