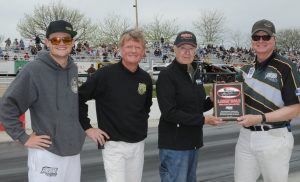 We all cross paths occasionally in life with some very special, extraordinary people. Some are famous. A few are remarkably intelligent. Others are just flat out funny folks. Then there are those who are genuinely a good person, someone who has a heart of gold. Larry Hale fits this example to a “t”.

Larry does not seek attention nor does he necessarily stand out in a crowd of people. He is faithfully grounded and equally respected by piers far and wide.

During Firebird’s longest running Ignitor event, on May 1, 2021, the New family awarded the 86 year old its highest honor, the Racemaster award. He was recognized not only for his merits and virtues, but also his allegiance to competing at Firebird and the sport of handicapped bracket racing.

His career started amazingly enough in 1951 in southern California. He was 16 years old. To our knowledge he has actively participated in our sport of drag racing for a period of time that now spans 70 years. That is a feat and accomplishment that is quite astonishing in its own right.

A highly skilled mechanic, Larry has done literally all the work on his race cars over the years. His 1960 Studebaker Lark is powered by a 535 cubic inch Cadillac, which runs deep into the 10’s at speed of nearly 120 mph.

Never one to invest in an oversized set-up to get back `n forth to a racing event, he continues to use something that would’ve been a way more common sight in the 1960’s versus today. He is quite content driving his mid-60’s El Camino towing an open trailer that his two-door hardtop travels on. The Elco is much more than a grocery getter, it too can run quick enough to compete in Pro (and has) when the need arises.

In 2007, Larry not only swept Firebird’s Pro track championship, but also won Saturday and Sunday of the Nightfire consecutively in Pro (and fourteen round wins in a row), along with the overall point’s title for the weekend. This was a feat that he places amongst his most successful outings racing against truly the best of the best in no box competition. In that same year he was acknowledged as the Pro Allstar during the Nightfire to boot.

All of us think the world of Larry. His loyalty and support of our Firebird facility is second to none. We’re proud to recognize him as a bona fide Racemaster of the highest order. Big tip of the hat, wishing him the very best in his racing pursuits.