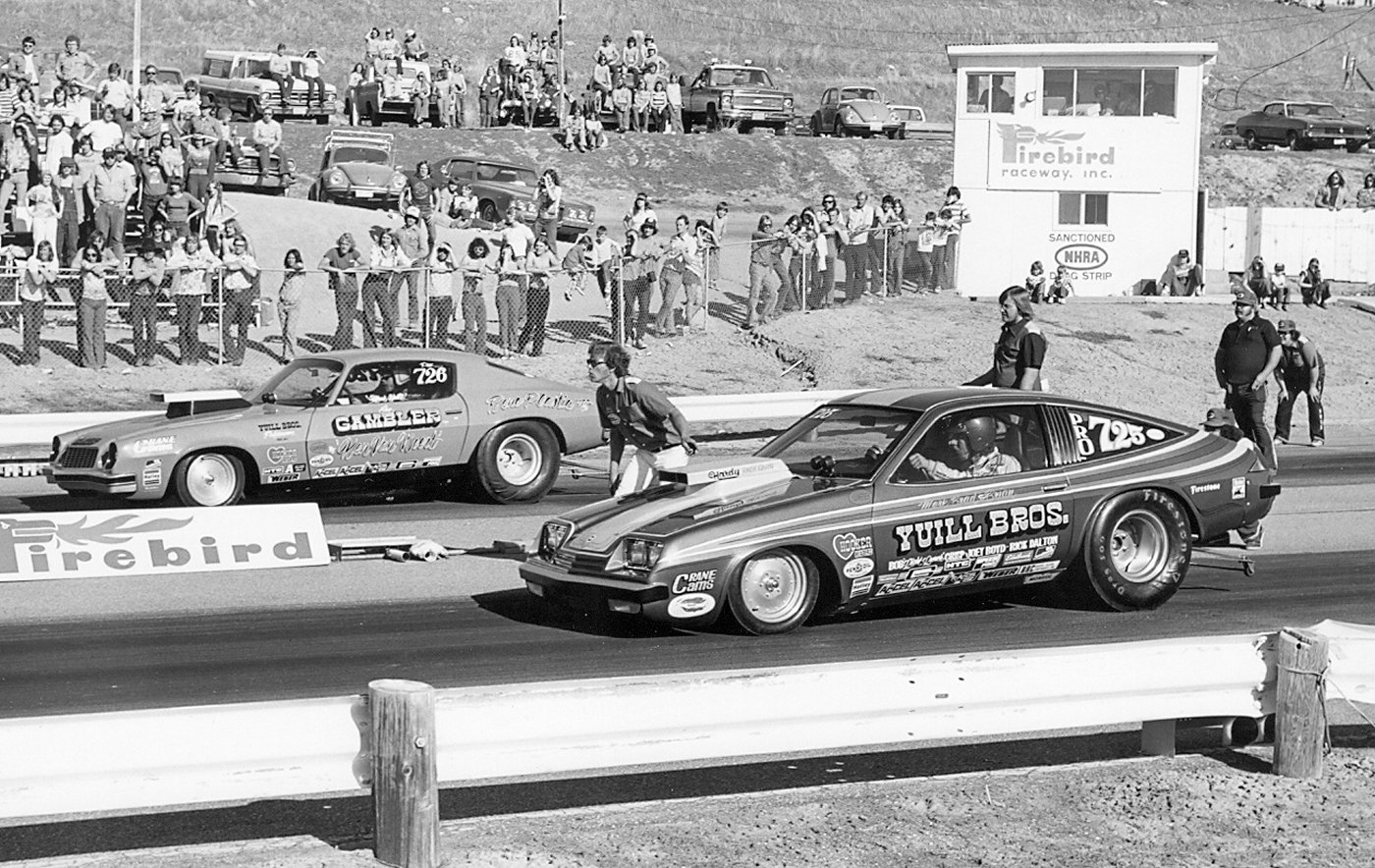 During the height of the Pro Stock class in the 70’s, Firebird played host to quite a variety of events featuring the popular category.

Long revered by both the NHRA class racer and those who competed in bracket racing during the day, Pro Stock was also quite popular with the hard-core race fans, too. 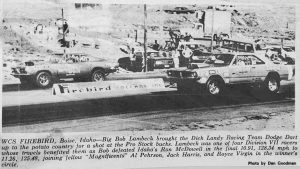 It all started in the Treasure Valley foothills fifty years ago during Firebird’s second NHRA World Championship Series event. Not unlike Top Fuel, Funny Car and Top Gas, Pro Stock in its infancy became one of the core Professional classes starting in 1970.

Bob Lambeck won the inaugural race in Pro Stock at Firebird driving the Dick Landy Racing Dodge Dart. The southern California racer ran 10.91-128.34 to defeat the local favorite “Gentle Ben” Plymouth Cuda of McDowell & Taylor, which posted an 11.26-125.48. Scanned from our scrapbook archives, check out this cool story about the Ron McDowell and Jerry Taylor Cuda that appeared in the pages of Hot Rod in 1970.

Match races were quite common in the day, too. One of the most anticipated races during that time period featured the trademark unlit cigar chompin’ “Dandy Dick” Landy against the “Banzai” Vega wagon of Pete Sather from eastern Oregon. Landy was one of pioneers of the class helping to develop and inspire the NHRA to introduce it as an official Pro category. Through a career that spanned almost 20 years, Landy was one of the most famous Pro Stock racers of all-time. Read more in an article dated February 24, 2004, of the car pictured below in the pages of Hot Rod magazine. 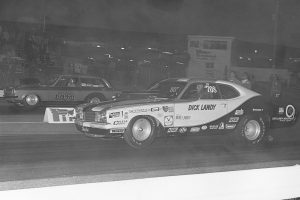 This was during an era when gold dust first started appearing at dragstrips. We can remember when announcer Richard Schroeder requested a coffee can with a plastic lid. He, along with Landy, get the credit for showing the Firebird staff how to enhance the bite of the asphalt starting line. Holes were poked into the plastic lid of the can and the rosin was sprinkled on the track surface like you might do in your kitchen with powdered sugar. And then it was broomed in quite often by the driver. It added quite a bit a drama for the fans looking on, especially when the teams would follow up with a dry burnout or often two across the line to work the gold dust into the surface.

Yet another memorable moment was the year that Bill Bagshaw drove the “Red Light Bandit” against the likes of the “California Flash” of Butch Leal. During this era, both of these loyal Mopar competitors were some of the fastest and most well known door car racers from California.

Also during the 1970’s, track operator Bill New hosted an open Pro Stock race staged in conjunction with the Spring Championships. The 8-car qualified field attracted an amazing cast of 14 Pro Stocker’s from Division 6 and 7. One of the real favorites of the day was Kevin Rotty from Tucson, Ariz. His keen sense of racing at altitude was very evident, which helped him to garner nearly instant success at Firebird over a bevy of sea level competitors.

Another one of the real hitter teams during this era was the Yuill Bros., both Mark and Brad, who were headliners at many Pro Stock races. The Reno-based operation was a big fan favorite and very successful during the height of Pro Stock. At one point in time the two brothers fielded two separate entries. The cars were not only fast, but drop dead gorgeous, too.

One of the early goals was to initiate a local base of racers that could support the class. As a stepping stone, there was even a short period of time that the Firebird management attempted a Jr. Pro Stock division. It was thought at the time that this might inspire more cars to help build the class. Along with the McDowell & Taylor and Sather entries other Idaho/eastern Idaho racers joining the fold included: Rick Kent, Vic Asqueta, Mike Montgomery and perhaps one or two others.

The class had a little over a ten year life span of racing at Firebird. The last Boise NHRA WCS event featuring Pro Stock was 1980. The Yuill Bros. won that day, a weather-delayed race staged in mid-August.

Firebird joined forces with Jim Tice and the AHRA in 1981 (quite a story in its own right, with Bob Ipson/Salt Lake City, Jim Rockstad/Portland Int’l Raceway & Seattle Int’l Raceway jumping ship, too). By our recollection, the final Pro Stock races occurred during the AHRA Ignitor Nationals. The race was a full blown national event with an open 16-car field for AA/Funny Car, along with Pro Stock, Pro Comp, BB/Funny Car and an assortment of sportsman classess.

Attracting a diminutive four-car field, the final Firebird winner of Pro Stock was Californian Lee Hunter at the wheel of his unique Lincoln Zephyr (running 8.23-165.08) to defeat Jerry Walker. Not 100% certain on this, but we’re pretty sure this was start of big-inched (mountain motor) Pro Stock in the AHRA, which had a much larger following in the mid-west.

Pro Stock was fun to watch as a fan. We’ve always been grateful to all those teams who made the tow to Firebird to be a part of Pro Stock’s heyday.

Thanks to photography provided by Rich Carlson, Sam Callaway and Steve Rogers.