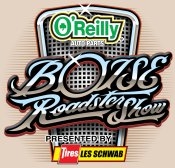 The remarkable 1937 ford coupe of Kenny Welch, just home with a great eight finish in the Ridler competition at the Detroit Autorama, won the coveted Goldmark award in his own backyard. Welch is only the third Idaho builder to win the crown jewel “eagle” trophy, which was first awarded to Texan Jim Thayer back in 1989.

Mel Eggleston, Boise, was selected as the 35th recipient of the esteemed Master-Builder award. Mel first entered the roadster show with a 1940 Ford coupe and won the Best Custom award in 1975. He has consistently been involved with the treasure valley event for over forty years including his nice 1932 Ford five-window coupe in this year’s show.

The overall best club display was earned by the Idaho British car club with a four-car display that involved British memorabilia.

A number of exhibitors were in contention for the people’s choice award, which is voted on with all the gate tickets of the fans. This year’s winner was the impressive “T-Rex” 1969 Camaro shown by Jay and Ryan Gruba with G3 Rods from Rapid City, South Dakota.

Our appreciation is extended to this year’s ISCA judging staff headed up by supervisor Scott Hammon. He was joined by his Greg Warg, Devin Ellis, Dan Young and Rod Detterich.