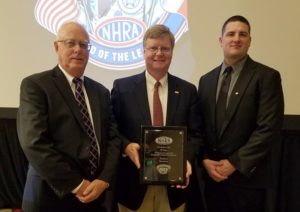 Congratulations to all the top finishers in a variety of NHRA classes. Champions were recognized in the NHRA Lucas Oil Drag Race Series, Summit E.T. Finals, National Opens and Land of the Leaders Challenge. In addition a variety of recognition awards were presented to those most deserving in an assortment of areas.