Always a trendsetter, the management of Firebird has taken a pro-active approach to introduce the all new TruSTART technology at the upcoming Halloween Classic over the weekend of October 12th-16th.

Engineered by Bob Brockmeyer at Compulink Timing Systems, TruSTART is a new starting line component that comes into effect when both drivers leave before the green light in eliminations, resulting in a pair of red lights. A red light is never how you want to start a drag race, but with TruSTART, it is not a matter of who red-lights first, but who red-lights the worst.

“Many of us in Division 6, from racers to track operators, have discussed this very topic for many years in casual conversation and at our divisional meetings,” mentioned Firebird’s Scott New. “It doesn’t happen all that often, but truthfully it levels the playing field when two racers leave too early 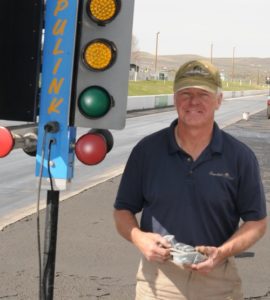 in any round of eliminations at the tree. Not unlike past Compulink inventions like Autostart, Stagelok, Cross Talk and many, many other elements, Bob Brockmeyer has always been on the front edge of creating and implementing ideas for the betterment of our sport. We look forward to unveiling TruSTART at the Classic for everyone to experience.”

Earlier this season, both the Spring Fling events this past Spring debuted TruSTART in Las Vegas and Bristol. From what we understand, the system was met with nothing but rave reviews. Most recently, Bandimere Speedway outside Denver added TruSTART to their timing system in mid-September, receiving positive feedback from racers in a variety of classes in their Fall E.T. Series.

Thanks to Bob Brockmeyer for investing the time and energy to develop this new system that truthfully brings a level playing field to the starting line Christmas tree.

We appreciated Bob making the long drive from his home base in Silverthorne, Colo., to western Idaho to install TruSTART at Firebird, another unique creation from our friends at Compulink.