Firebird’s early years were filled with quite a wide variety of promotional experiments. Some worked, many did not. It was a turbulent, hectic and often chaotic series of events during Firebird’s formative months.

One story in particular revolved around one of the most outlandish daredevils in history – Evel Knievel.

As the story first begins, famed oval track promoter Bill Crow would get credit for first bringing Evel to Idaho. Staged at Meridian Speedway on August 3, 1968, the madman would successfully jump 13 cars aboard his Honda CL-350 Scrambler.

To no surprise, the speedway grandstands were packed. The turn away crowd was anxious to witness the very rider who eight months earlier had attempted to jump 141’ feet over the fountains at Caesars Palace in Las Vegas. His efforts that fateful day proved disastrous, crashing heavily on the landing ramp. Obviously he survived, ready to fight another day.

With the success enjoyed at the speedway, the brain trust of Firebird International Raceway, as it was originally called, started thinking this might be a valid idea. Perhaps it would prove to generate enough money to ease the challenge of getting through the winter months. 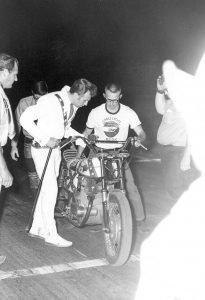 So the deal was struck. Evel would be scheduled to jump at Firebird in the Fall of 1969.

As the story was told, one of the track’s founding members Bob Blazier became the emissary for the flamboyant stuntman. Two pitfalls would confront the fledgling new race track. One: there was little to no funding for the pre-race advertising, which certainly doesn’t help on the promotional end of things. And second: every dollar saved was dedicated to paying the talent for the one-day event.

Because only one day was available between other big-market jumps, the event fell during the same time-frame as an important national conference that Bill New had committed to attending early in the season. Surprisingly enough, New did not attend the day of the jump.

Blazier became literally a gofer, minion or even more appropriately a servant to Evel over the course of his stay in Boise.

As Bill New once told the story, “Evel treated Bob like trash, basically hauling him around town to buy him a new set of cowboy boots to anything else that tripped his fancy. In no two ways about it, he was an absolute ass.” Nobody will ever deny him of being anything short of arrogant, pretentious and outright egotistical during the prime of his early days.

Well, the day arrived. He would be on board a Laverda American Eagle 750 cc motorcycle as Evel was adorned in his famous white jumpsuit covered in confederate stars and blue stripes. The excitement was riding high. There was plenty of buzz from the motorcycle faction in the area, leading many to believe this might work. 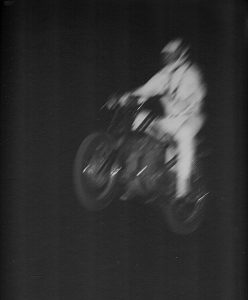 The question was soon answered. All together, a crowd of close to 300 fans came to watch Evel jump a fleet of vehicles. In the end, the bottom line was quite short of breaking even. “It would be yet another off-season of beans and franks,” as New often said of the early days.

Although the end result was well short of expectations, we still think it was pretty amazing that the legend of Evel Knievel once jumped at Firebird.

If by chance you know more of this story or perhaps attended that day (or have a photo or two in a scrapbook), be sure and drop us an email or call. We always love learning more.

Special thanks to the late Sam Callaway for taking one of the only candid shots of Evel, above, on the starting line before his jump with Carl Struthers (Carl’s Cycle Sales) holding up his motorcycle. The blurry mid-air shot was in our archives, photographer unknown.