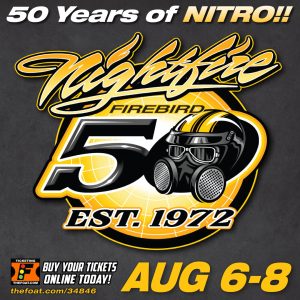 Friday’s (August 6) Pro qualifying at 8 pm, which is presented by The Blower Shop. On Saturday (August 7), Professional qualifying is at both 2 pm and 8 pm. St. Luke’s presents Sunday’s (August 8) Prime Time Finals at high noon.

The race marks a key stop in the NHRA Hot Rod Heritage Series for both AA/Funny Car and AA/Fuel Dragster. Leading the charge in Funny Car will be the “Northwest Hitter” Camaro piloted by Bobby Cottrell. The Austin & O’Brien team is not only the defending NHRA national champions in addition to collecting titles at both the 2020 Nightfire and 2021 Ignitor stops in Boise.

In Top Fuel, the field will be led by former four-time NHRA World Champion Jim Murphy with the “WW2” nitro burning front-motored dragster.

The fan favorite AA/Fuel Altereds will compete in an exciting 8-car eliminator on Friday thru Sunday, too. We are excited about the return of reigning Nightfire champion “Red Dragon” roadster of Tom Padilla who will look to defend his 2020 title.

The Xtreme Pro Modified Association will also make their first appearance at Firebird in two seasons. Series organizer Sean Renteria will lead the field with his wicked blown Plymouth Valiant four-door sedan based out of northern California.

The event will also showcase the spectacular, wheelstanding Jelly Belly Stagecoach of Ed “the Outlaw” Jones.

Fire blasting Jet Cars, both “Tomahawk” and the “Ice Man”, will help light up the skyline under the lights all three days.

The famed Bracketeer Series presented by Mirage Trailers returns and will see racers battling it out in Bracketeer (Super Pro), Pro, Sled/Bike, Pro Comp and Heavy. Additionally the popular Lucas Oil Top Fire eliminator will qualify the quickest 16 open wheelers and the quickest 16 full-bodied rides, with an overall champion crowned during Sunday’s Prime Time Finals. Racers will also vie for bonus money in the NHRA.TV CHALLENGE four-day point’s series, along with the coveted Wally statues.

Save on advance discount tickets at both Stinker Stores or pre-purchase online.