As a diversion to the current plight we all presently live under, we thought we would occasionally share a short story on our website. It’s no secret Firebird founder Bill New was a pioneer of the greater Treasure Valley racing scene. 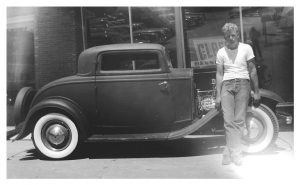 Running a stroked AB Merc flathead and aftermarket manifold equipped with a Stromberg 97 carb, New was a regular competitor at the Drag Races staged on Gowen Field road. One of his first experiments was to add nitro to the tank in an effort to make his full-fendered coupe a bit quicker against competitors of all shapes and sizes. Based on early stories, the deuce started out in primer, but after enough money was saved up, Bill and Bernie painted it Chrysler red, which made it visually impressive.

It was during this time frame that New, along with close friend Ron Hon attempted to join the Gearjammer’s club. But as luck would have it, the club was full. During the day most clubs accepted somewhere between 10 to 15 members. Most wanted to keep it simple and not add too many to the fold.

So New and Hon partnered together and formed the Bootlegger’s club, further detailed at the bottom of this story. It was a group of friends, which included several hot rodder’s from the air base in Mtn. Home, all with one common interest: hot rodding and racing. Together they maintained a club house down on Reserve Street in Boise, not far from a similar home base for the Gearjammer’s club. The photo below includes eight of the original Bootlegger’s including New, 3rd from left.

During those formative years New was employed at a service station, working on mechanical challenges of customers in the garage and hand filling gas from the pump. At night, club members would converge at the club house to try and figure out a way to make their hot 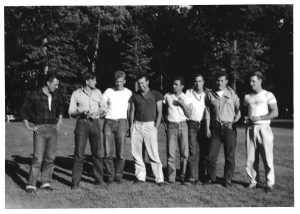 rods quicker for the races scheduled on select weekends.

An early highlight had to be the formal announcement that the NHRA would be making a Safety Safari stop in Pocatello in 1954. The abandoned air base would be the proving grounds for an event that would literally put eastern Idaho on the forefront of the national drag racing scene.

New and the majority of club members all made the cross state trip from Boise to Pocatello. Many of them raced against cars from all over the intermountain west and beyond. The event was featured in the pages of Hot Rod magazine.

Unfortunately for New, he had misfortune strike just a couple of days before the club would make the trip eastward. While working on his deuce at Peter Wheadon’s Shell station on 11th & Front after hours, he left his NOS hood, both top panel and sides lying next to the wall outside overnight. Upon returning to work the next day, the hood was gone.

Upon further inquiry over the shocking situation, it was determined that the trash truck took the hood early the next morning to the valley dump. In an effort to retrieve the valuable part, New and buddies headed to the landfill to see if they could track it down. Unfortunately it was never found. 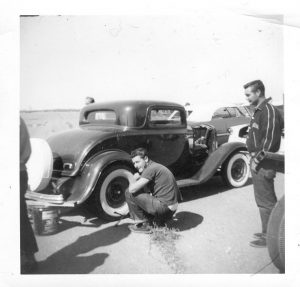 As much as New wanted to compete in Pocatello, it would be NHRA Field Director and head tech man Bud Coons that denied him passing tech due to his missing hood. Wanting to support his fellow club members, it was decided that his newly purchased wheels and wide white wall tires would be transferred to a buddies ride, pictured. At the time, this was a real sense of pride to New since most guys could only afford porta walls (an imitation or much less expensive version of the true WWW tires).

As luck would have it, the back half of his friend’s race car was captured in a photo that made the Hot Rod magazine feature coverage. New always loved telling the story it was his opportunity at fame, one of his rolling stock making into the pages of the bible of early hot rodding.

To the best of our memory, we don’t think any of the club members won a class at the Pocatello event, but everyone had a good time, gathering with fellow hot rodders from all over.

While researching this story, it came as no surprise that other early hangouts for the car scene included Murray’s Drive In, Howdy Pardner Drive In and Kellison’s Speed Shop on Broadway. 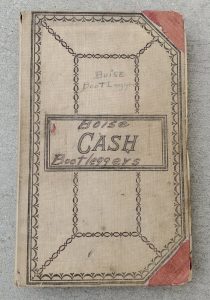 We thought we’d share a real treasure from the original club. Thanks to former Master-Builder and Racemaster Gale Sasser, he preserved the original book for the Bootlegger’s that documented the formation of the club. Sasser was a part of the second generation of the Bootlegger’s, which started after both New and Hon left Boise to go to the mecca of drag racing in southern California around 1956. Sasser was the standard bearer for the club when it was resurrected in later 1956, `57 and beyond.

The book not only provides minutes from all the early meetings, but also details like club expenses, dues and such.

For the record, the officers voted to lead the club were: 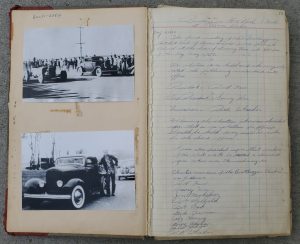 Charter memberships included the three officers and the following:

Bill New passed away in February of 2014. Ron Hon, 91 years of age, is still enjoying life to this day, which includes quite an extensive historic auto collection. It would be interesting to learn more about the other charter members should any family members or friends visit our site.

Special thanks to Roger Worley for sharing the historic photo (at the bottom of the story) taken to the best of our knowledge, in Pocatello. We are always grateful to all those who have shared photos and stories from the early days of Firebird, the Roadster Show and other related artifacts from when drag racing and hot rodding originated in the great state of Idaho.