The time has almost arrived for the return of the oldest event on the Firebird track schedule. The 51st edition of the Ignitor Nitro Opener features AA/Nitro Funny Cars, along with terrific field of Gold Cup competitors.

The NAPA Auto Parts Ignitor presented by Peterson Chevrolet is the second stop in the 2022 NHRA Hot Rod Heritage Series. The season kicked off in grand fashion with the grand daddy Good Vibrations March Meet in Bakersfield. 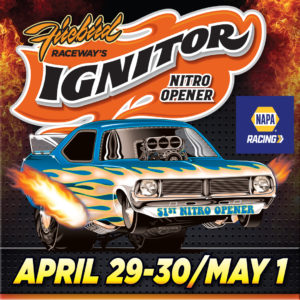 The Stinker Stores Nitro Knockout will take center stage at Firebird in the longest running major drag racing event in the Pacific Northwest. The current pre-entry roster includes the reigning NHRA World Champion and defending winner of both the Ignitor and Nightfire, the “Northwest Hitter” Camaro piloted by Bobby Cottrell. The hot green Camaro is co-owned by Hall of Famer Bucky Austin and Mike O’Brien.

The open 8-car qualified field will have an opportunity to test on Friday afternoon (running from noon-6 pm). Qualifying will officially kickoff with three sessions at Noon, 3 pm and 5:30 pm on Saturday. Sunday’s final eliminations are schedule for high noon.

Sunday, May 1st is Military Appreciation Day. All active members of the Armed Forces and Veterans will be admitted to Sunday’s Ignitor Prime Time Finals for FREE!

EVEN BETTER YET: and as a token of our appreciation to all the families who attend the Ignitor, kids under the age of 15 will be admitted at no charge. Yes, FREE!

Racing will be offered in all the Boise Muffler/NAPA Auto Parts Gold Cup eliminators, which includes Super Pro, Pro, Sled/Bike and Sportsman. The two-day event will feature the richest purse in the five-plus decade history of the Ignitor event.