Following on the heels of a tremendous year of racing at Firebird Raceway is the release of the 2017 Drag Racing Schedule.

Excitement is already building in celebration of our 50th year of racing in western Idaho.

As a prelude to the drag racing season, the year kicks off at Expo Idaho with the O’Reilly Auto Parts Boise Roadster Show presented by Les Schwab Tires. The ISCA Summit Show Car Series event will jumpstart the motorport’s calendar on March 10-12.

Notable on this year’s milestone calendar of events will be Firebird’s three hallmark weekends of racing. The 47th Annual NAPA Ignitor will return on May 4-7. The track’s oldest event will play host to the opening Lucas Oil Drag Race Series meet in the Northwest Division, along with the second stop in the NHRA Heritage Series for the AA/Funny Car class.

In August, Firebird’s “signature event”, the Pepsi Nightfire Nationals will showcase Top Fuel and AA/Funny Car in the Heritage Series, along with the excitement of AA/Fuel Altereds, Jets and a Wheelstander under the lights nightly. We’re also very excited to be the home of the oldest major bracket tournament in North America called the Bracketeers with Firebird’s richest sportsman purse of the season on the line. The Nightfire returns August 10-13.

The Fall time of year will once again be home to the highly popular NAPA Halloween Classic XXIV event on October 11-15. Hands down, it’s the Halloween party of the year for hundreds of racers and families attending from all over the west.

Start making your plans today. We’ll have a full color brochure printed in the very near future, so you can have a hard-copy in hand, too. 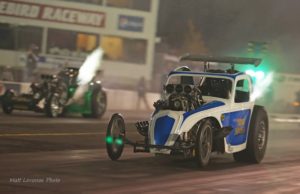